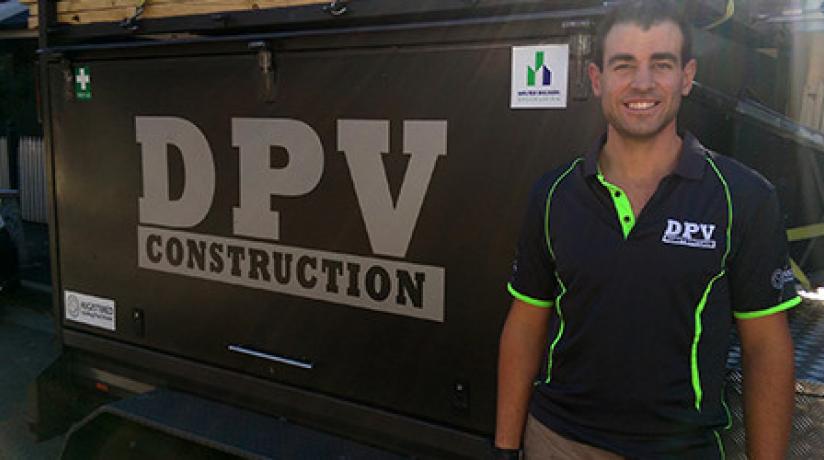 Summary: As is often the case with our members, it was dad who provided David Vastbinder’s earliest influence for a career in building and construction. The elder Vastbinder carried out small home improvement jobs around the house, and his son watched him carefully. In his teens, small labouring jobs confirmed his interest.

• Master Tradesman member
• Based in Blackburn South
• Member since 2013

As is often the case with our members, it was dad who provided David Vastbinder’s earliest influence for a career in building and construction. The elder Vastbinder carried out small home improvement jobs around the house, and his son watched him carefully. In his teens, small labouring jobs confirmed his interest.

David’s success today is based firmly on quality work, continual learning and personal service for his clients.

After year 12, David weighed up the options of a carpentry apprenticeship or studying business at university. Seeing the value of business skills for his future, David completed a Bachelor of Business, but maintained hands-on involvement with labour on construction sites.

Afterwards, still keen on a career in construction, David embarked on a Carpentry apprenticeship at 21, made rapid progress and was awarded early release.

“I had a couple of weeks of work lined up when I finished my apprenticeship, and planned to call my boss once these jobs were finished, but I never needed to,” David says. My clients were happy with my work, and the jobs kept coming.”

Looking back on the path he’s taken, David sees the value of his degree and the grounding it gave him in operating his own business. He supplemented his education by completing the Business Skills for Apprentices in 2013 at Swinburne, run in association with Master Builders, and was later awarded the Master Builders Foundation Leadership Scholarship the same year, directing the scholarship funds towards completing a Diploma in Building and Construction.

David has always viewed gaining registration as an important step in building his business and is now a Domestic Builder Limited and is also underway with preparations to apply for Domestic Builder Unlimited registration, to service return customers wanting larger projects.

David’s younger brother Mark is also a qualified carpenter, and the two have now being working together for about twelve months. “We’re best mates at work,” he says. “I think I probably talk with him more than my wife.”

DPV’s current projects include a house extension, decks and bathroom/laundry renovations. David’s favourite projects are the bigger ones, he says, as he sees a more obvious end result, and knows it will make a difference to the way his clients live.

“It’s important to be organised,” David says. “I make sure I’m on time, or early, as a courtesy to my clients. I see them as friends and I want to do the best possible job for them. Attitude is really important; if I’ve missed something on a quote, I’m prepared to wear the costs to learn from my mistake.”

David enjoys seeing his team mirror his approach. “Some of the tradies I use didn’t always value punctuality or let me know if they were running late,” he says. “Now they let me know. We all keep learning from each other.

“The best thing about my job is the people—the tradies and clients. I get to meet new people every week and they all seem to become regular clients. I don’t see this as my job; it’s more like a hobby because I enjoy it so much.”

David is now focussed on stepping back from the tools a bit to do more background work, such as quoting and estimating, with the aim of having to do less of the administrative work after hours.

“If I could change something about the industry it would be licensing,” David says. “Plumbers and electricians need to be licensed, but carpenters don’t. Plumbers and electricians can charge reasonable fees, but an unqualified handyman can undercut qualified carpenters and then produce poor quality work, often requiring someone else to come in and fix their mistakes. Trade licensing would make being a qualified carpenter more of an achievement within the construction industry. Carpenters work hard to get where they are, so it would be great if there were a level of separation within the sector.

“When I think of the construction industry, I think of Master Builders as an important part of it,” David says.