Summary: Master Builders Victoria (MBV) has welcomed the announcement from the Victorian Government that the renovation sector is permitted to return to work inside occupied premises once 70 per cent of Victorians are fully vaccinated.

Master Builders Victoria (MBV) has welcomed the announcement from the Victorian Government that the renovation sector is permitted to return to work inside occupied premises once 70 per cent of Victorians are fully vaccinated.

As the industry-leading body for building and construction in Victoria, MBV has continued to strongly advocate to the Victorian Government over the plight of its renovation members.

MBV CEO Rebecca Casson said for many, many weeks now, the renovation sector has not been permitted to work inside occupied premises and have been severely limited to only one person working outside.

“We’re delighted that the Victorian Government has now formally advised that once Victoria passes the 70 per cent double dose vaccination target, workers will be able to work both indoors and outdoors at occupied premises,” Ms Casson said.

“Earlier this week, MBV provided a private briefing to a range of Government Ministers on why the renovation sector should be permitted to re-open in a COVIDSafe manner – and sooner than originally slated in the roadmap, i.e., our community reaching the 80 per cent target of people over 16 being fully vaccinated.

“In our discussions with the Victorian Government, we called on them to immediately act on this important issue.

“We are delighted to advise that, because of our advocacy, and as we foreshadowed in the media today, the Victorian Government has now formally advised that home renovations can re-open from as early as next week, once 70 per cent of people over 16 are fully vaccinated.”

The changes mean workers can now work in occupied premises where the work must take place in the home (for example, cleaning and renovations).

A maximum of five workers plus a supervisor will be permitted unless additional workers are required for safety reasons.

Workers must have received a least a first dose of the COVID-19 vaccine (the second dose deadline is 15 November 2021) or have a valid medical exemption.

“I know that Master Builders Victoria have been calling for that to happen (able to re-start indoor renovations when 70 per cent of Victorians are vaccinated),” he said.

“We rely heavily on what Master Builders Victoria tell us; they’ve been consulting closely with the Government.

“We’re certainly hopeful that the advocacy that they’ve been doing will come through because it means a lot to us, means a lot to our staff, clients, and trades.”

Mr Gardiner said Supa Group Constructions had about 28 sites operating in total, with 16 of those sites currently unoccupied.

“So, we’ve got roughly 60 per cent that is unoccupied, which is quite a chunk out of our business,” he said.

“But certainly, we’ve got clients that have been, waiting for quite some time.

“It’s been over two or three months, where they’re living - literally living - in a building site. And most of our workers are fully vaccinated.”

Ms Casson said she hoped that this advance notice of the re-opening of renovations would allow MBV members the time to plan, gear up, and line up trades or redeploy staff.

“We also hope that this means many Victorians will have kitchens and bathrooms finished by Christmas and will be able to celebrate the New Year in comfort,” she said. 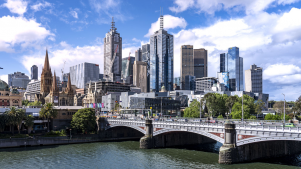 Phase B of the National Plan

Victoria has now transitioned to Phase B of Victoria’s Roadmap: Delivering the National Plan. As the Building and Construction Industry re-opens..

As the building and construction industry re-opens to 100%, work must still be carried out in a COVIDSafe manner.