Summary: It doesn’t seem possible that a year has passed since our first Annual Review last September, but the financial year 2015–2016 has sped by, with Master Builders Association of Victoria proudly delivering many achievements for our members and the building and construction industry.

It doesn’t seem possible that a year has passed since our first Annual Review last September, but the financial year 2015–2016 has sped by, with Master Builders Association of Victoria proudly delivering many achievements for our members and the building and construction industry.

After many years of consultation with Government, Master Builders welcomed the Building Legislation Amendment (Consumer Protection) Bill 2015, which became law in April 2016. These changes will be significant for the industry. We are pleased to see the tightening of the owner-builder requirements to ensure that homes built in our state are subject to competency standards. Master Builders will continue to monitor the implementation of these new provisions, including additional disciplinary processes and mandatory conciliation, to ensure that their implementation will not impose undue burdens on builders.

On 31 March 2015 the industry CFMEU EBA passed its nominal expiry date. It was only at the beginning of 2016 that we saw some employers in the commercial sector sign up to a CFMEU EBA. The deal provides for what we consider are unsustainable wage increases with no meaningful offsetting productivity improvements. In August 2015 we released a report by Deloitte Access Economics, Victorian Construction—Labour Costs and Productivity, which highlighted that construction industry EBA wages have been growing at unsustainably high rates. Our updated report, released in May 2016, showed that when we add the impact of wage rises continuing at 5 per cent, we stand to spend $806 million over the next four years to deliver government infrastructure, representing a missed opportunity to build, by way of illustration, ten schools and three hospitals. With 100,000 people settling in Victoria every year, we need to build houses, roads, hospitals and schools to accommodate the nearly 2,000 people arriving every week. We continue to hold out hope that a sustainable conclusion to the negotiations can be reached for those builders who have not yet signed a deal.

In this financial year, we continued to deliver exceptional training, with nearly 95,000 hours delivered and over 4,200 students trained. Our contribution to the range of skills in the industry as well as the quality of the training we deliver was formally recognised when we became the Victorian Small Training Provider of the Year at the State Training Awards, on 26 August 2016. We consider ourselves fortunate to be counted amongst some very worthy candidates in the training sector.

Our 141st year saw us make record profit, which will allow us to invest back into our member services, incredible facilities and operations. Thank you again to our Master Builders members, committee members, staff, sponsors and alliance partners for yet another wonderful year in 2015–2016. Be it legal advice, training, registration help, or some other facet of service to you, it’s our privilege to help you build your business. We look forward to serving you, our industry and the community in the coming year. 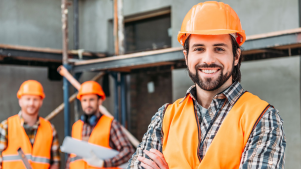