The effect of HomeBuilder on residential building activity has significantly mitigated our initial forecasted decline. Most of the HomeBuilder-induced residential building activity has been in detached new home building and major renovations jobs, with high density new home building not seeing the benefits of HomeBuilder. HomeBuilder has had a large stimulus effect on the Australian economy with the total value of new home building work done over the next five years likely to be $9.2 billion more than what was forecasted in July 2020. In terms of the jobs market, it is likely to result in a boost of 83,000 jobs, of which, 46,150 are in the construction sector. The extension of HomeBuilder and the relaxation of its eligibility requirements has meant that HomeBuilder-supported new home starts are expected to continue up until the end of September 2021 and some completion of works occurring up until the early months of 2022.

Less positive news is that the significant fall in overseas migration will have a very unfavourable effect on underlying demand for new home building for years to come. Indeed, June quarter 2020 indicates that there was a net migration from Australia equivalent to a loss of almost 6,000 residents and is the first time since World War II that Australia’s population has lost people to emigration. High density housing such as apartments will be the most adversely affected from the fall in overseas migration.

Nevertheless, the stimulus measures have meant that 28,000 more new homes will be built across Australia over the years to 2024-25 compared to what was initially forecasted in July 2020. Most of this will be in Victoria, where it will see almost 20,000 more new homes in this period. 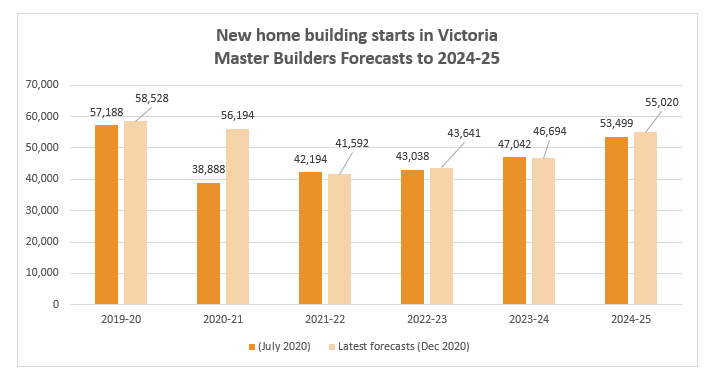 However, it is expected that strong demand within the public sector over the year will buttress much of this decline and provide some stabilisation to the market before private sector demand recovers.

The introduction of HomeBuilder, along with other measures that aided in the industry’s recovery such as Victoria’s Big Housing Build and cuts to stamp duty, are a direct result of the advocacy efforts of Master Builders Victoria. With the softening of the high-density residential and the commercial building sectors, understanding ways to support these sectors will be a key policy area of focus for the association. Over the past year there have been significant increases in the cost of building materials, most notably timber, steel, and.