Does Serena have a point?

For as long as I can remember, I harboured ambitions of walking out on to Centre Court at Rod Laver Arena. Stroll the famous grass courts of the All England Club in Wimbledon. Bounce around on the hard courts of Arthur Ashe Stadium and have myself covered in the famous red clay of Roland Garros.

Sadly for me, the closest I’ll now get to achieving any of these is by watching an ‘Insta-story’ or if I’m really lucky as spectator. Still there are so many lessons I was taught by my coaches over the years that time and time again remind me of how valuable their words were.

None more so, than this year’s now (in)famous US Open Women’s Final.

Tennis is a numbers game. 4 points wins a game. 6 games wins a set. 2 sets wins a match. Seems relatively easy, that is until you cast your eye at your opponent on the other side of the net who is trying to win these same points, games and sets quicker than you can.

So how is it that a virtual unknown, up and coming tennis player, growing up in Haiti and Japan toppled a 23 times Grand Slam winner? It’s simple really…by choosing to focus on the next point!

Whether Serena was being coached from the stands. Whether the chair umpire appropriately punished her or whether there was an over-reaction from Serena’s part – Naomi Osaka was the one really putting on a display worthy of a champion.

I’m reminded of a line my coach drilled into me as a junior. “The next point – is always more important than the last point!” And this is all I could think of as I watched Naomi Osaka win her maiden Grand Slam title.

Serena was so focussed on the point she ‘lost’ that she was unable to regain her composure. What followed were excuses, blame and denial. This is a perfect example of what we can look like when we spend energy and effort focussing on things or in Serena’s case ‘a point’ that was never coming back.

Naomi Osaka on the other hand, was only ever focusing on the next point she had to win. And just when you thought Naomi Osaka was finished with her lesson, think again. Naomi Osaka’s resilience was on show for everyone to see.

Yet somehow through all of this Naomi Osaka triumphed - by choosing to focus on the next point.

Tennis is a brutal game. It’s physically demanding. It’s mentally draining and every single aspect of the game is scrutinized more now than in its entire history.

If resilience is having the capacity to recover quickly from difficulties; then Naomi Osaka showed us all how mentally tough and resilient she is. She chose to focus on the next point and was able to win her 4 points, 6 games and 2 sets quicker than her opponent.

As the result and highlights are broadcasted around the world over the next few days I hope the focus remains on Naomi Osaka’s maiden Grand Slam victory. The tennis player who took on a champion in her own backyard and triumphed by displaying champion characteristics.

Authored by Chris Kulesza, Head of Training and Operations BLSC

The role of industry in creating collaborative practices

Collaboration could be the key to the future of the industry. 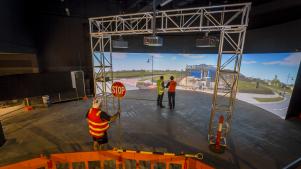 View CodeSafe’s Pre-Start Mentoring Workshop information and see how a past participant of the BLSC is using his skills.